A question that struck me during a just finished first session at the Juniorenkreis Publizistik at Bresinchen: What is a free or liberal order? Is it an order where people have as much freedom as possible or does it mean that people agree to rules in freedom? 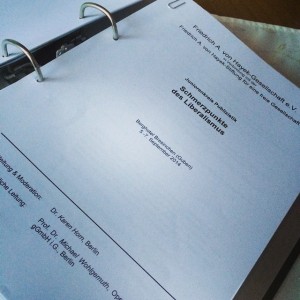 In the latter sense liberal regulations must be broadly welcomed, at least where the freedom of choice is valued. But how can rules be established that are accepted by everyone in a society? Probably that can never be realised completely. An approach could be:

Such a society is a liberal society which follows the principle of subsidiarity.