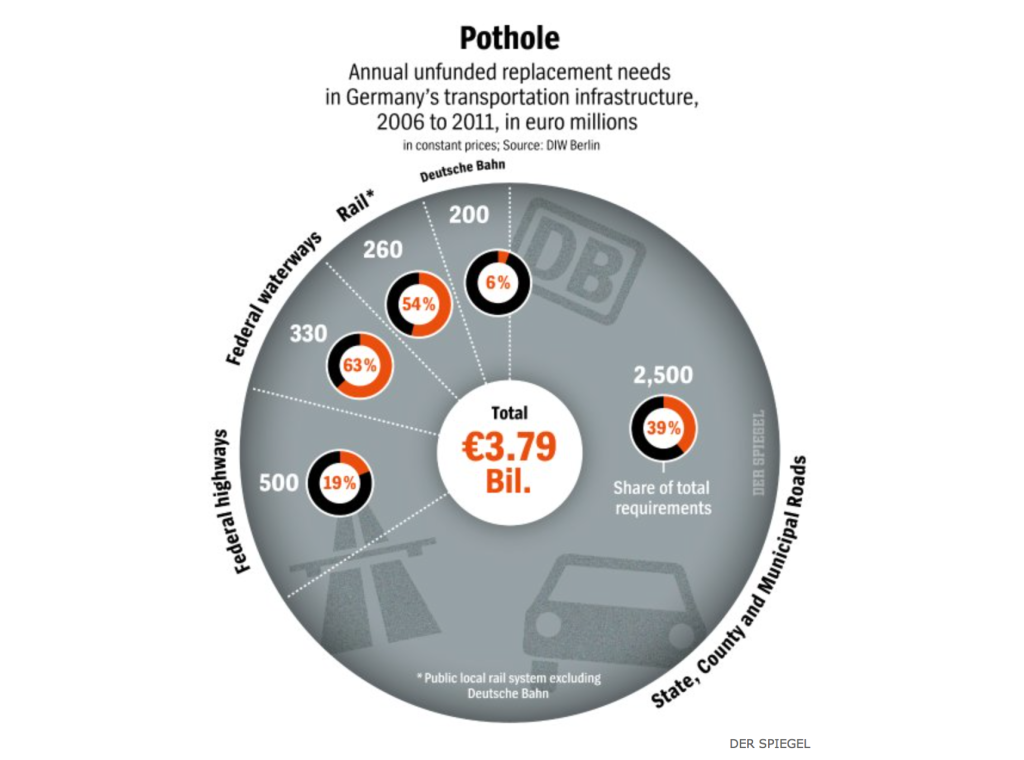 One big questions of the demographic change: How to keep infrastructure in good condition? Germany is running in that problem or rather already has it. There are unfunded replacement needs in Germany’s transportation infrastructure from 2006 to 2011 of 3.79 billion Euro, according to Marcel Fratzscher, the head of the German Institute for Economic Research (DIW). Fratzscher says:

“Germany is on a downward path and is living from its reserves.”

The future of the country and the everyday lives of its citizens depend on how each euro is used today. If a euro is spent immediately, it has no use for the future. It can also be saved for future consumption. Or it can be invested in companies, education and infrastructure, so that it becomes the basis for future prosperity, technical progress and additional jobs. The problem in Germany is that money is currently being used primarily for the first two purposes. According to DIW calculations, the investment shortfall between 1999 and 2012 amounted to about 3 percent of gross domestic product, the largest “investment gap” of any European country. If one looks only at the years from 2010 to 2012, the gap, at 3.7 percent, is even bigger. Just to maintain the status quo and achieve reasonable growth, the government and business world would have to spend €103 billion ($133 billion) more each year than they do today.

Why are birth rates falling when societies become rich? How should places in kindergartens and organs be distributed? Is organic food really healthier – or do we want to believe it? The Pixeloekonom is watching (daily) life from an economic perspective. // Who ist the Pixeloekonom?